Out and About
Guides and Itineraries

Game day: how the locals do it

There’s State of Origin, International Rugby, Super Netball and even the English Premier League all landing on Perth soil to give the people of Perth a sporting season not to forget! Most games will be held at Optus Stadium and you can catch all the Super Netball action at RAC Arena.

If you haven’t got your tickets yet, not to worry! Located less than 10 minutes east of Optus Stadium and even closer to RAC Arena is Perth city, heaving with an array of restaurants, pubs and bars within walking distance of RAC Arena or a short train ride away from Optus stadium. So you can grab your mates and watch the game at your favourite pub, or you can soak up the atmosphere in the city before or after the first whistle.

However you want to spend your fan-filled day, here are five of Perth’s best sporting pubs to consider adding to your itinerary.

Market Grounds is a large, multi-level inner city pub located in the heart of the Kings Square precinct. Opened in 2017, it was the first establishment to officially connect Northbridge with the Perth CBD in more than 100 years.

Featuring a main bar, garden bar, a dining area and mezzanine, Market Grounds is as versatile as it is modern and stylish. With a sumptuous bar and dining menu and an extensive drinks list, there is something for everyone at Market Grounds. Plus, it’s ultra-convenient for netball fans, only a short walk away from RAC arena! And for footy fans, it's just a quick five-minute walk to the Perth train station which runs express to Optus Stadium.

If you’re looking for a slightly more intimate venue to grab a bite to eat before the game, consider dropping into The Shoe Bar in the new Yagan Square. Less than 200 metres from the Perth train station, this venue is the ideal place to start your day.

Shoe Bar offers contemporary dining over two levels with a menu that features all the pub food classics you love, with a strong WA focus on locally sourced produce. If you’re a wine lover, you’ll love Shoe Bar’s offering of unique West Australian wines too! Beer selection at The Shoe Bar

Directly opposite the Perth Train Station is The Globe, one of Perth’s oldest remaining pubs. It features a vibrant beer garden and bar, combined with an eye-catching interior that effortlessly combines the building’s unique heritage with a modern flair.

A popular establishment with Perth locals, you’ll always find a good crowd at The Globe before a game. Serving up a modern-Australian menu that has everything from small bites to larger meals and an extensive beer, wine and cocktail list, you can’t go wrong at The Globe. THE ROYAL ON THE WATERFRONT

It’s worth stopping in at The Royal on the Waterfront in East Perth before a game. The popular boardwalk bistro overlooks the water with magnificent views out to Optus Stadium.

Enjoy The Royal’s modern-Australian menu, craft beers and long wine list before taking the 10 minute scenic stroll over the Matagarup Bridge to Optus Stadium. If you’d never taken the walk over the bridge to the stadium with thousands of other passionate fans, it’s worth making it a priority on your trip to Perth. Boasting an impressive five bars, 175 beer taps, an onsite micro-brewery, a large beer garden with huge TV screen and container bar, and an extensive food menu sure to wet even the fussiest of appetites – it’s no surprise the Camfield has quickly cemented itself as a fan favourite for WA footy fanatics wanting to gather before and after the game. If you're the designated driver - we've got you covered too! All City of Perth Parking bays and car parks are FREE after 6pm! Yep all CPP car bays are free on weekends and weekdays (7 days a week) from 6pm till 5:59am. You'll also discover three hours free at the below car parks on weekends:

Head to City of Perth parking for more information.

Powered by Curator.io
72 hours in Perth 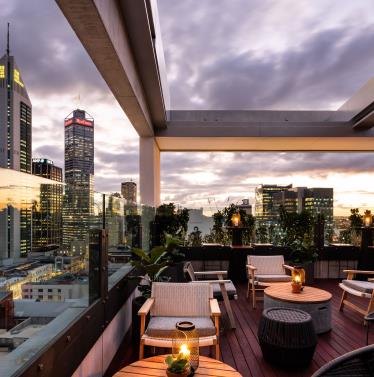